How it all started...

The idea for Mosaic Church Ministries began about a year and a half ago as Pastor Wayne Botkin and Pastor Roz Picardo, were driving in the car. They had just attended a church planting meeting at the Vineyard in Columbus. They began to ask the question, “Why is it that when a church is planted only one planter is sent?” The biblical model Jesus instituted in the New Testament demonstrates this work being done in teams; Jesus sent out his disciples two by two. Then they said to each other, "What if we planted a church together?

Wayne and Roz didn’t give the idea much credence initially, since they were each part of two different churches. Wayne being the Pastor of the South Campus of Christ Church and Roz, the Executive Pastor of New Church Development at Ginghamsburg, Yet neither of them could shake the conversation. They started to realize a God-dream was being birthed in their hearts: two pastors coming together to plant a shared church. The next thought was that there was no way their two churches would agree to partner; it’s just not typically done by two different churches. After more thought and prayer, Wayne & Roz decided to approach their lead pastors and others. Surprisingly, all parties were intrigued and supportive. After much prayer, meetings and deliberation, this God-dream came to fruition, and Mosaic Church  launched as new faith community in the fall of 2017 at the Rave Cinemas at the Greene.

Covid-19 brought along it's challenges and incredible opportunities for us to serve our growing community. After a summer and fall season of Drive-In worship due to movie theater closings , we were able to move in to our new  home in the Fairfield Commons Mall. Repurposing the old Elder Beerman space has allowed us to become pioneers in this type of marketplace worship space.

A mosaic can be defined as a combination of diverse elements forming a more or less coherent whole. Beauty, color, intricate patterns. all these are elements of a mosaic. As you take a closer look you’ll see a mosaic is made up of many small pieces, many broken or chipped. Each piece with it’s own attributes but yet as whole a beautiful creation. This paints a picture that helps to describe the church as a whole, many individual broken pieces brought together by an Artist who will take each piece and fit them together to create a masterpiece. 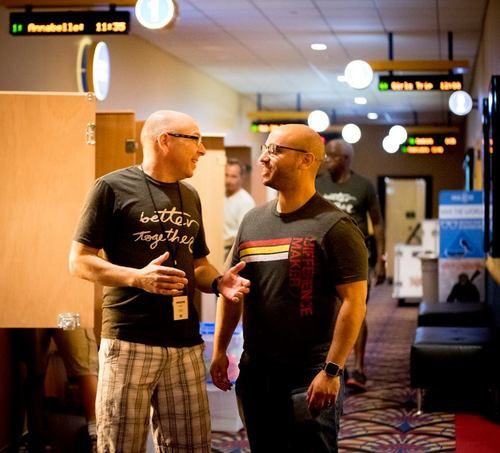